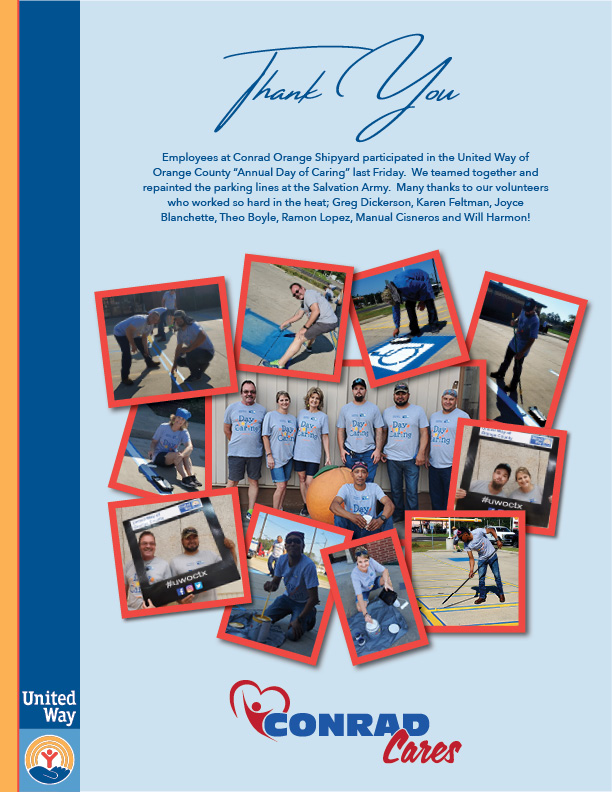 Employees at Conrad Orange Shipyard participated in the United Way of Orange County “Annual Day of Caring” last Friday.  We teamed together and repainted the parking lines at the Salvation Army.  Many thanks to our volunteers who worked so hard in the heat. 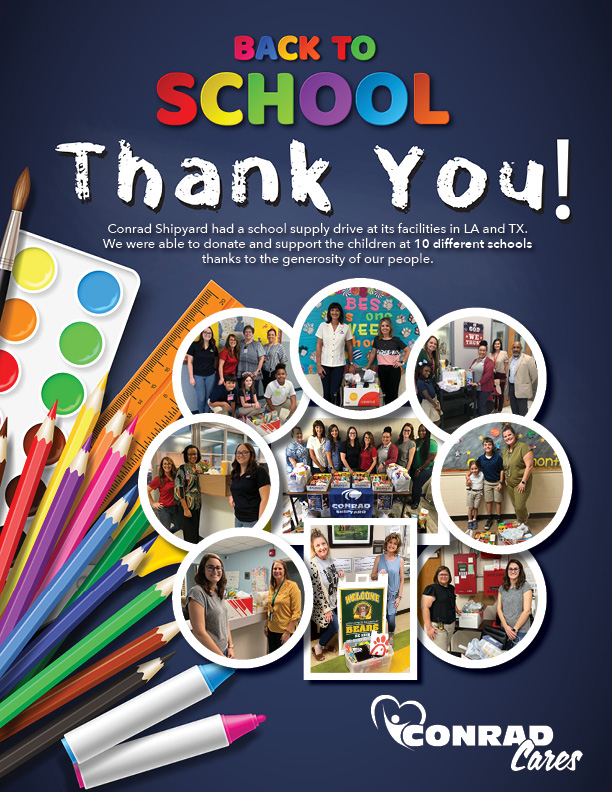 Conrad Shipyard had a school supply drive at its facilities in LA and TX. We were able to donate and support the children at 10 different schools thanks to the generosity of our people. 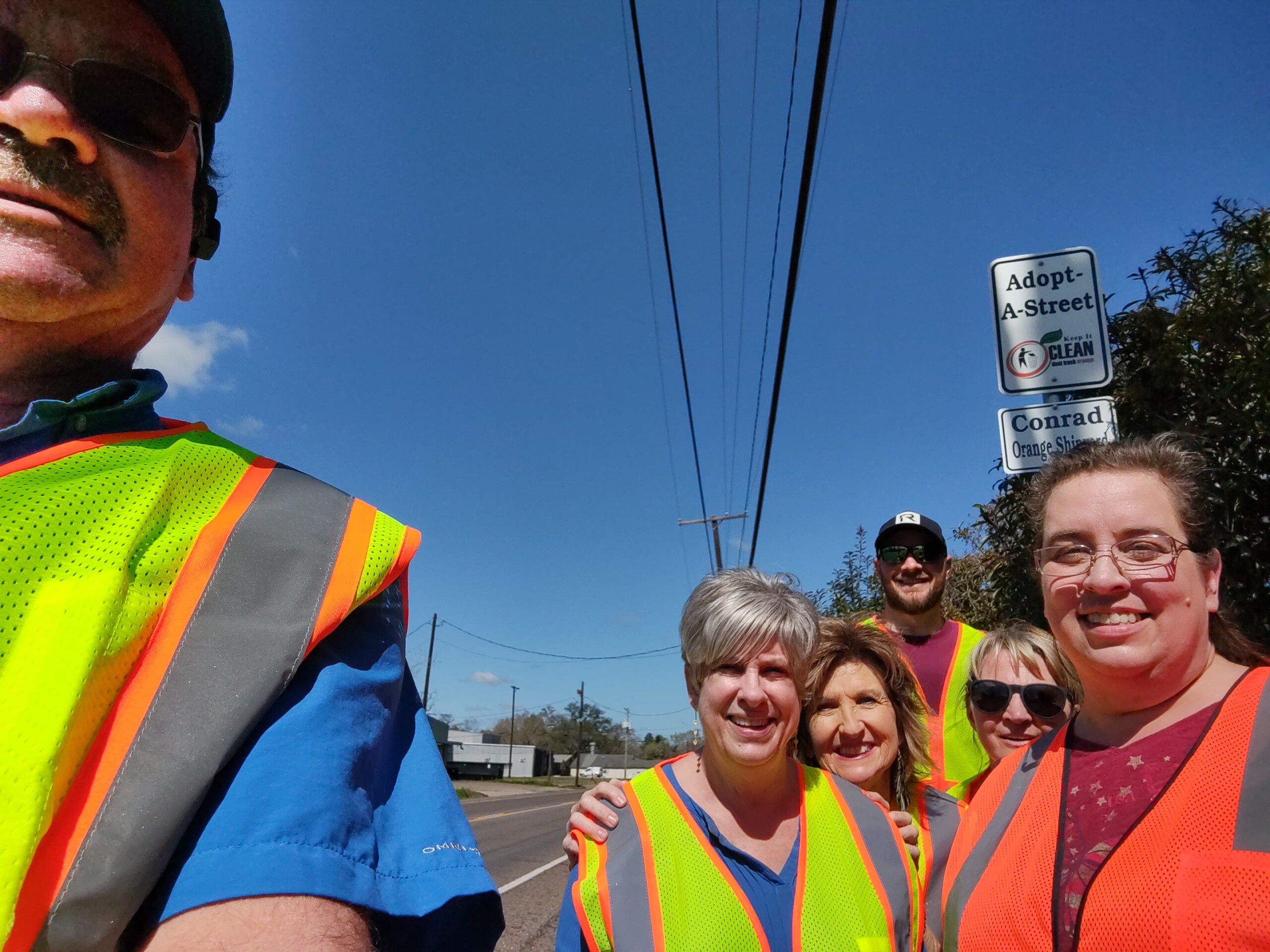 Conrad Orange Shipyard had their first trash clean up, since joining Orange’s “Adopt-a-Street Program”.  They adopted Border Street which runs parallel to the shipyard.  Many thanks to the volunteers that worked so hard with the initial clean up!  They had some very interesting finds along the way; from a commemorative coin to a Burger King sign! Keep up the good work Conrad Orange and thank you to the employees that participated, what a great way to give back to the community. 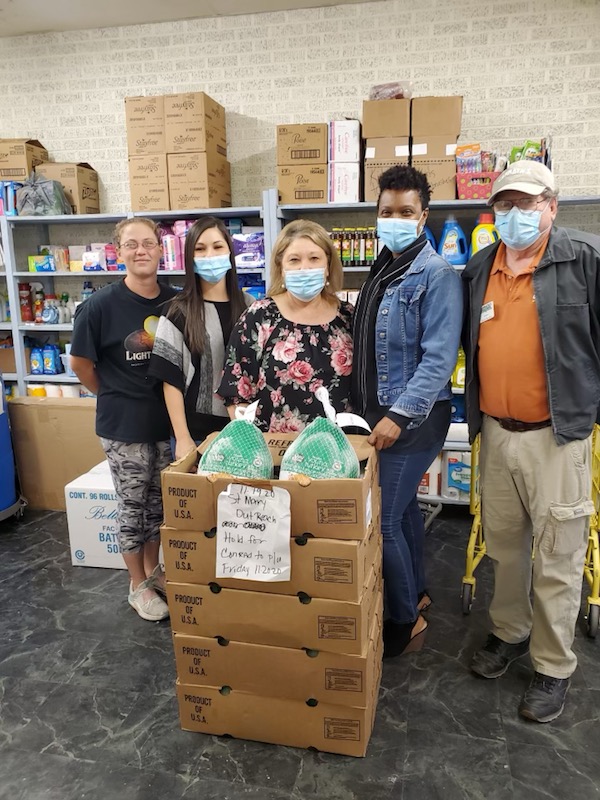 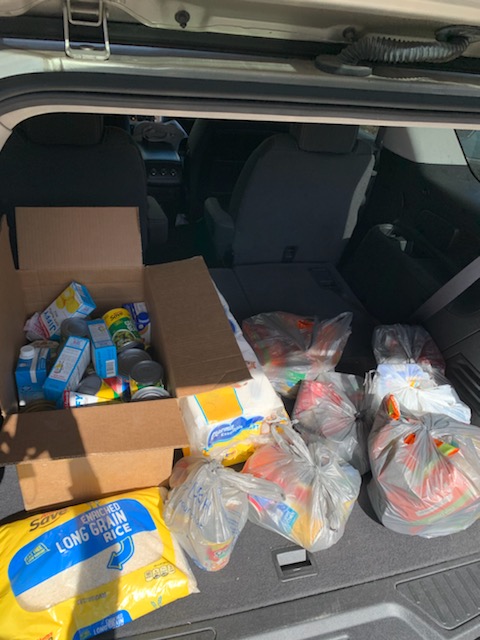 Conrad Employees Continue to Give Back to our Community.

We want to say THANK YOU to all of the Conrad Shipyard employees who participated in our first annual Holiday Food Drive. The donations were brought to St. Mary Outreach in Morgan City to be distributed to families in need across the parish. Established in 1985, St. Mary Outreach serves 350-450 meals per month in the Tri-City/St. Mary Parish Area with that number tripling during the holiday season. Conrad Shipyard appreciates the donations of its employees as well as the gracious volunteers and employees associated with St. Mary Outreach in helping reach its goals. 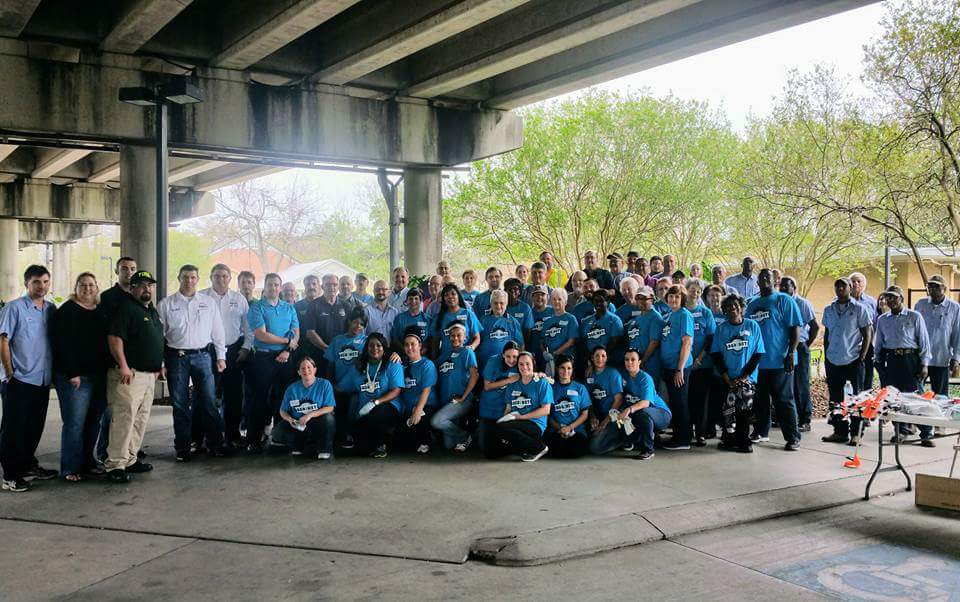 On March 10, 2017, Chris LaRocca and Stephanie Ledet represented Conrad Shipyard at the Annual Leaders Against Litter campaign in Berwick. 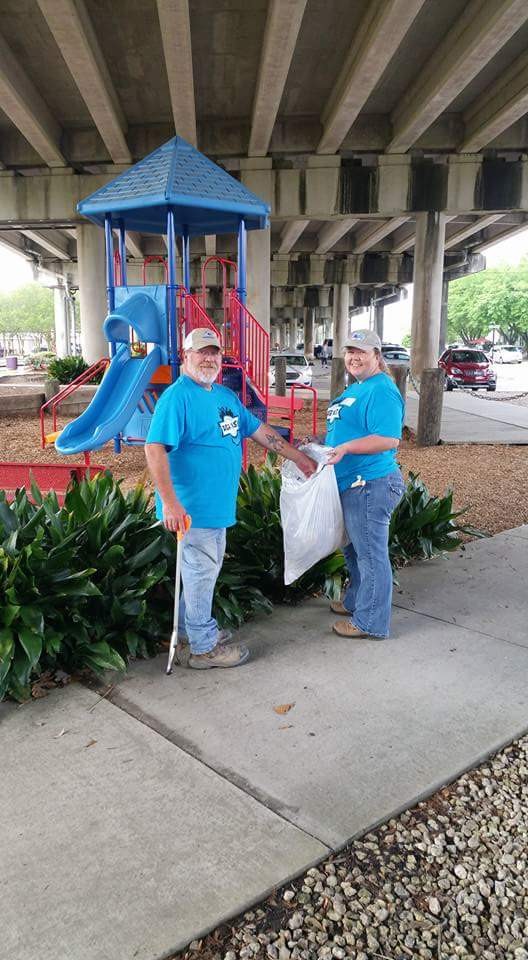 Conrad Shipyard has a long history of giving back to our community. One such example is Conrad Project Manager Dewey Theriot who supports ‘Give the Children the World.’ a charity for children with life-threatening illness.

One of Conrad Shipyard’s founding principles is Giving Back. Conrad Orange Human Resources Manager Joyce Blanchette is a heartrending example of healing by giving to others. 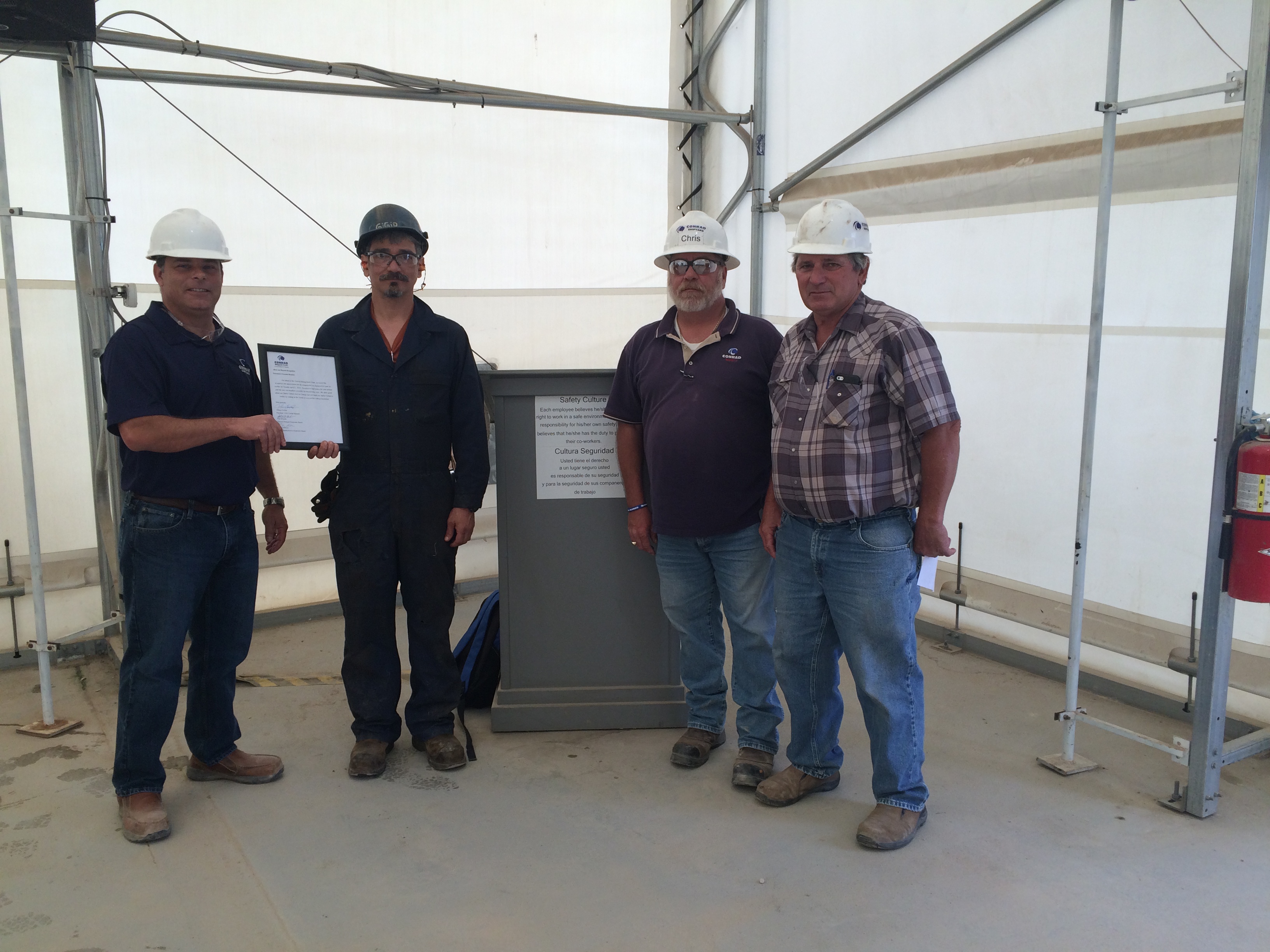 ABOVE AND BEYOND – Quick Reaction Saved Co-Worker:

I would like to take this time to recognize one of our workers at the Deepwater Facility. On Tuesday April 12, a worker was taking his scheduled break and began choking. Gerardo Martinez, another worker at the Deepwater Facility, without hesitation went to the aid of his co-worker. Gerardo performed the Heimlich maneuver on his co-worker freeing the foreign object that was obstructing his airway. This possible life threatening crisis was averted because of the actions of a co-worker, Gerardo Martinez. I would also like to note that while speaking with Mr. Martinez later about his actions, he was very humble and stated that he did not think twice about it and that he had not done it for recognition but because it was what he was supposed to do. I thanked Mr. Martinez for his response to his co-worker in distress and told him that I would like to recognize him for his good deed.

I will be recognizing Gerardo Martinez at the Deepwater Facility Safety Meeting on Monday, April 18th. 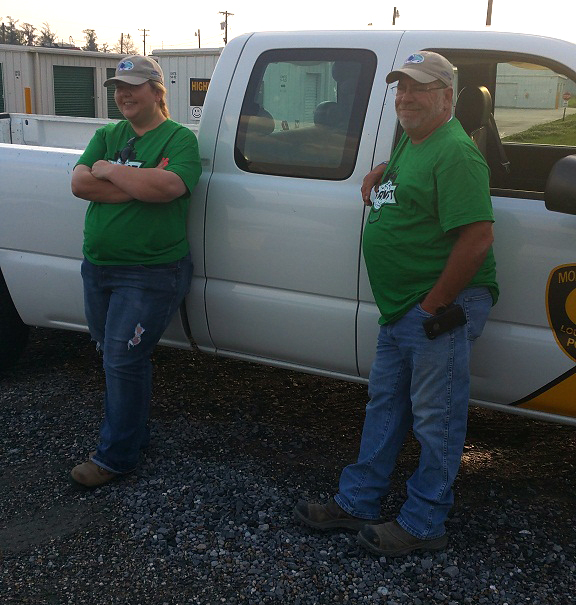 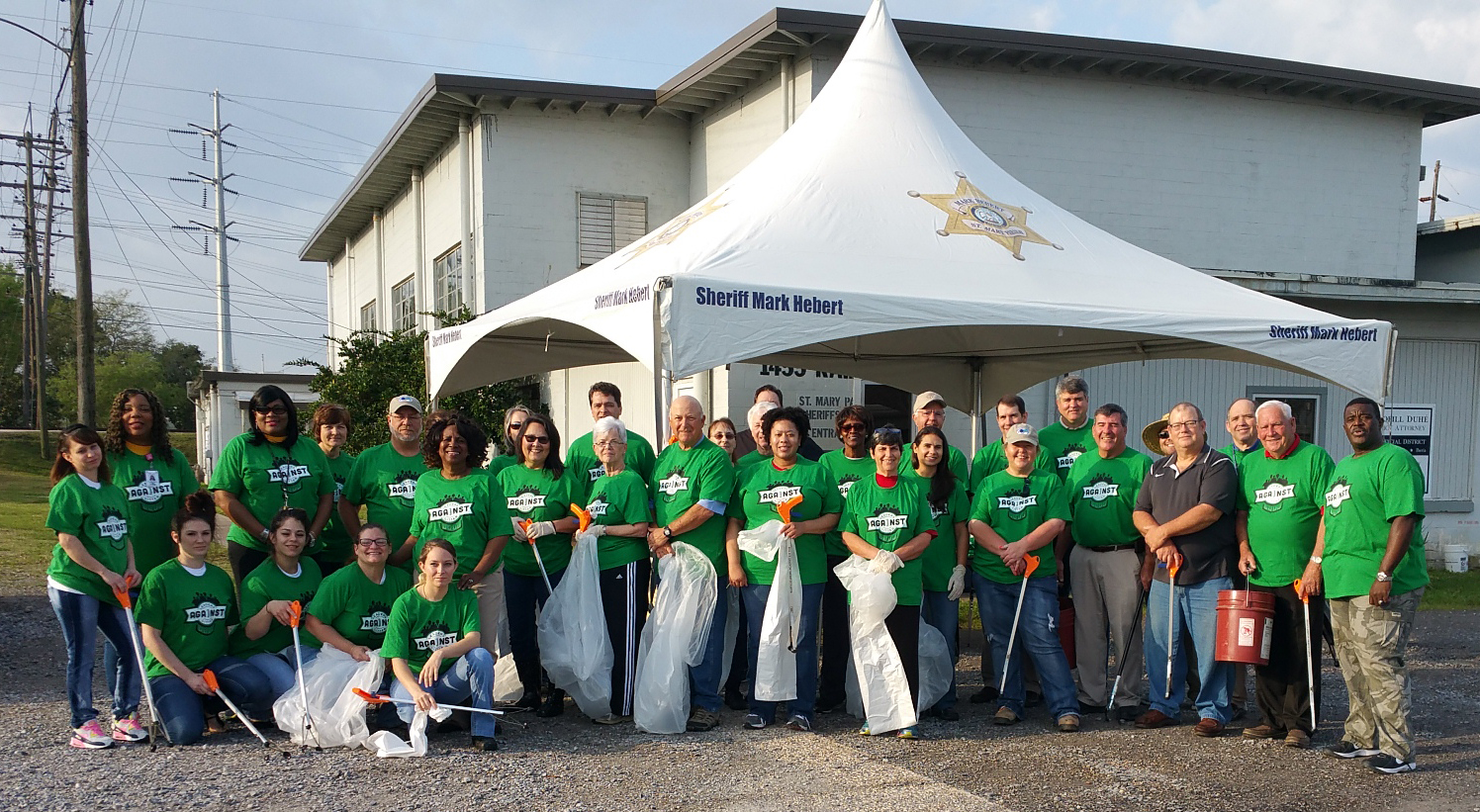 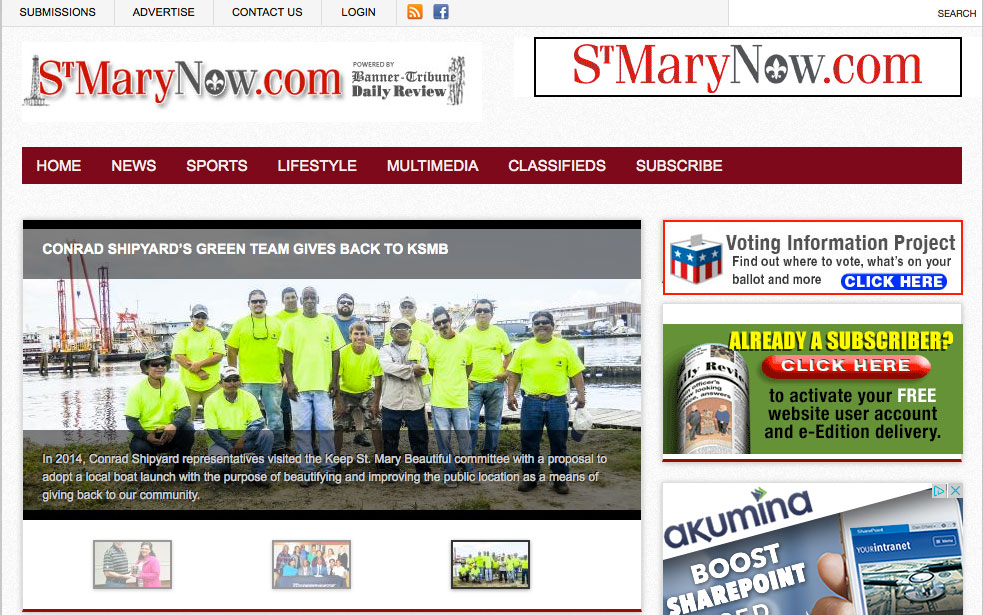 An article about the work Conrad’s Green Team has made it to the home page of the Banner Tribune and will be published in the Daily Review as well! 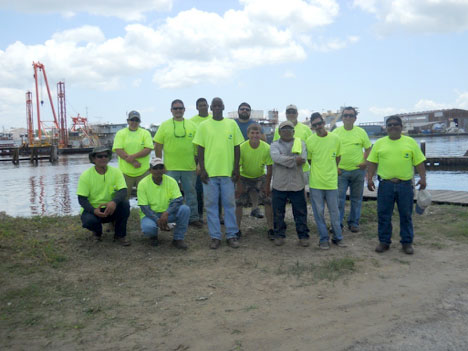 Conrad Shipyard, established in 1948, prides itself in following the generous spirit of its founder Parker Conrad. In 2014, company representatives visited the Keep St. Mary Beautiful committee with a proposal to adopt a local boat launch with the purpose of beautifying and improving the public location as a means of giving back to our community.

The Conrad Green Team was created that summer with the goal of cleaning the R.J. Marcell Memorial Boat Launch in Amelia. Each month the company would pick one Saturday morning when employees would volunteer a few hours of their time to work predetermined projects.

Since June 2014, the Conrad Green Team has replaced deck boards from both docks, painted yellow borders for an added safety measure, added timbers to and repainted handicap parking spots, replaced old posts and barriers for the boat ramp and done general litter/trash pickup as well as vegetation clearing. St. Mary Parish has also helped to improve the launch with the addition of dolphins to protect the docks from impact, opened the concrete debris barrier to allow rainfall water to flow out of the lot and added a float dock to the north dock.

The success of the Conrad Green Team can only be attributed to the graciousness of Conrad Shipyard’s employees who selflessly gave up their valuable Saturday mornings to work at the launch. They embody the community spirit and goodwill that Conrad Shipyard admires most.